Boundary Line / The Promise to the Flesh

Boundary Line / The Promise to the Flesh

Implementation process:
1. Collect the objects of local residents as part of the works, and look for remnants at the implementation site. Such as stones, branches, empty bottles, and so on left on the island.
2. Measuring by flesh. On the island, Wu Gaozhong ‘s body (the artist lies down) is one unit in length, measuring 70 units of distance. “70” is the number of years since the establishment of the Republic of Korea (South Korea) and the Democratic People’s Republic of Korea (North Korea) in August and September 1948 respectively, following the delimiting of the 38th parallel.
3. Put the collected objects in the place where the artist’s flesh has been measured, forming a long straight line.

The Promise to the Flesh
— about the works Boundary Line

The Boundary Line is a relic of history and reality, as well as our own inner needs.
The boundary line of the territory comes from the remnant of the historical city-state system and the demarcation of the interests of the nation-state today. In reality, it is still a sensitive issue that touches on the national interests and the interests of the ruling clique. Especially at the moment of the return of nationalism, we still have to face all kinds of unbearable reality. This is the background against which we are talking about “peace” today.
The psychological boundary line comes from the needs of our own existence, and today the problem becomes more and more prominent. Because in the tide of globalization, especially in the era of the Internet, the so-called interests of the people and the interests of the country have begun to actually separate. However, how to protect the basic rights of individuals when the monopoly latent rules of multinational corporations and the trade associations are prevailing today? I think this is the core of today’s topic of “justice”.

My work Boundary Line is carried out on the above two backgrounds. I am interested in:
1. The sovereignty dispute over Baekryeongdo, Daecheongdo, Socheongdo Islands have something to do with the actual specific rights? What is the right to be covered up?
2. “Flesh measurement” — the measurement of the use of Wu Gaozhong’s own body as a unit of measurement is to present the flesh in the process of historical civilization and the current social reality disputes in the real situation of personal sovereignty. What kind of state is the practice of peace and justice in?
3. The helplessness of the flesh will be a permanent proposition. A real boundary line measured by body will change, and will slowly blur or even disappear over time.
4. The relationship among the remains, the flesh and the real world reflect the inherent natural connection in the interaction. 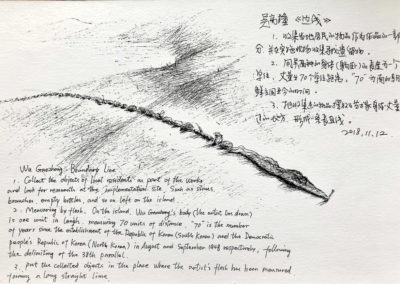