An Era of Peace, Peaceful Land is an exhibition project that redefines the meaning of peace. Peace is not an absence of a war. The project implements the idea that peace is germinated only when people are able to meet and communicate one another. When people meet, they show differences of opinion. But the differences only confirm the diverse facets of one world. There is no need to rush after justice and truth, ending up fighting one another. This exhibition is curated and produced in collaboration with Gyeongmo Lee and Yemi Kim. By showing the power of teamwork, the exhibition clearly realizes the attitude of being cooperative, which is one of the fundamental conditions of peacebuilding.

This exhibition is conceived as a series, like a feature drama, that is composed of many episodes and continues over several seasons. The exhibition began to sprout in Waterloo, Canada and to take root in Incheon, Korea. It should grow further in New York over the next year, branch in Beijing and flower somewhere else in the future. The reason to conceive of this exhibition as a series is that peace is not a state, nor is peacebuilding a one-time event. Peace is a process that requires ongoing engagement.

I thank the Andy Warhol Foundation for Visual Arts, who made possible the germination of the exhibition. I also thank the UN Office of the Mennonite Central Committee, which provided warmth for the exhibition to sprout. I tremendously thank the Incheon Foundation for Arts & Culture, who provided this new sprout with the energy to survive. I thank the New York City Department of Cultural Affairs, which has continuously nurtured the project from the beginning.

I thank the Korea Art Forum and the Ozaneaux ArtSpace in New York, as well as the Mansudae Art Gallery and Koryo Tour in Beijing. These organizations and corporations helped to locate rare artworks from North Korea or lent them to the exhibition. I also thank all the people whom I cannot name individually, but have been assisting the project behind the scenes. Last but not least, I thank all the artists who lent works of art to this exhibition, or participated in the exploration of the West Sea five islands. 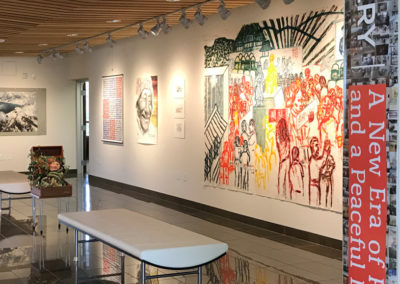