A New Era of Peace and A Peaceful Land

Doug Hostetter. Chair of the Board, Korea Art Forum

An Era of Peace, A Peaceful Land started from July 12 – October 5, 2018, at the Grebel Gallery in Waterloo, Ontario Canada, with the title, A New Era of Peace and a Peaceful Land. The gallery is part of the Kindred Credit Union Centre for Peace Advancement at Conrad Grebel University College on the campus of the University of Waterloo, and has a mandate to support artistic experimentation in pursuit of justice and peace. The title of this exhibit came for phrases taken from the speeches of South Korean President Moon and North Korean Chairman Kim at the inter-Korean Summit on April 27, 2018. The theme of the exhibit was:

Peace is not an absence of war, but the living process of freely interacting with others across borders seeking to understand their values and perspective, while striving for justice and truth.

This theme was carried out in the selection of the artwork and artists represented in the show. Kyung-bo Han from North Korea painted a demonstration in Pyongyang in 1989 during the 13th World Festival of Youth and Students and Suh Youngsun from South Korea portrayed demonstrations from the Candlelight Revolution in Seoul. In the same exhibit viewers were able to compare paintings of Mt. Paektu in North Korea by North Korean artists Chang-Ho Choi, Hyun-il Kim and Sung-il Oh with a painting of Mt. Halla in the South by South Korean artist Tae-soo Shin. Similarly there was a Korean landscape by Tae-Seok Ju from South Korea. The viewer was then challenged to compare those Korean perspectives of nature and landscape with pieces by American artists, Robert Morris and Joel Carreiro.

The photography in the exhibit compared and contrasted the photographs five artists: Song-Gwang Hong, Myong Un Kim and Ryong Kim from North Korea, Shen Yang from China and Zaun Lee from New York. The extensive collection of photographs of urban and cultural landscapes in four major cities around the world showed both our common human heritage and the differing perspective of each artist.

The New Era of Peace and a Peaceful Land exhibit at Conrad Grebel University College had been up since July 12th, but the Exhibit Reception was planned for September 20th, when curator Heng-Gil Han would give an introductory lecture, and do a curator’s tour of the exhibit for all who came. Several hours before the opening of the program, an art class from a local private high school that had many Asian international students came to the gallery for an advance tour of the exhibit. For over an hour, Heng-Gil had the rapt attention of a very diverse Asian/Canadian high school art class as he walked them through the exhibit. For most of the students, this exhibit was their first exposure to North Korean art outside of the propaganda “art” which is often portrayed in Western media. They were astounded to meet a Korean/American curator who could introduce them to authentic North Korean art, and bring their works together with that of South Korean and New York artists from a variety of ethnic backgrounds. The entire class requested their photograph be taken with Heng-Gil in front of the exhibit.
Korea has been in the news in the West since the Singapore Summit, and Canada has been playing a significant, but behind the scenes, role in encouraging interaction among North Korea, South Korea and the US. In January, Canada co-hosted with the US the Vancouver Foreign Ministers’ Meeting on Security and Stability on the Korean Peninsula. In July, Canadians facilitated a visit by five researchers from the Academy of Agricultural Sciences in Pyongyang to attend a 5-day intensive course in agriculture at the University of Manitoba in Saskatchewan. In late September, Global Affairs Canada hosted a delegation from the DPRK Foreign Ministry in Ottawa for meetings with Canadian government officials and representatives from the Canadian NGO community.

The Grebel Gallery was packed for the Exhibit Reception. A quick survey of the audience revealed faculty and students from Conrad Grebel and the other colleges of the University of Waterloo, the Korean community of Waterloo and other interested persons in southern Ontario. After a welcome by the director of the Grebel Gallery, Heng-Gil Han gave an overview of the work of the Korea Art Forum, and his vision of the power of art to build peace through helping people transcend their national and cultural identities and begin to understand each other and our common humanity. He described the stereotypes of North Korean art with which he had grown up, and the ways in which the art that he has selected refutes those stereotypes. He described the years of work and relationships that went into bringing together A New Era of Peace and A Peaceful Land exhibit. After the opening remarks, Heng-Gil Han gave a gallery tour for the audience, describing each work of art, the artist who had created it, the reason it was selected and the relationship of that piece to the other art in the exhibit.

Among the audience, I was particularly struck by the fact that a counselor from the South Korean Consulate in Toronto, over 100 km to the east, had come to Waterloo to attend the reception. He introduced himself and thanked me for my help in facilitating the exhibit. He then informed me the upcoming visit of the North Korean Foreign Ministry delegation to Ottawa, and asked me if the NGO that I represented would participate in the meeting with the Canadian NGO community. I was struck. Here was a South Korean Counselor trying to assure that there would be good representation from the Canadian NGO community for a meeting with North Korean diplomats. Could it be that our reception was already implementing the exhibit theme — freely interacting with others across borders seeking to understand their values and perspective, while striving for justice and truth? 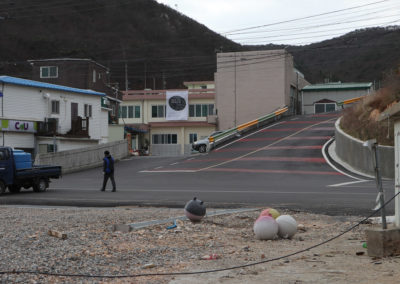 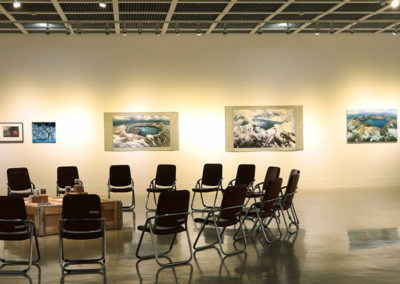 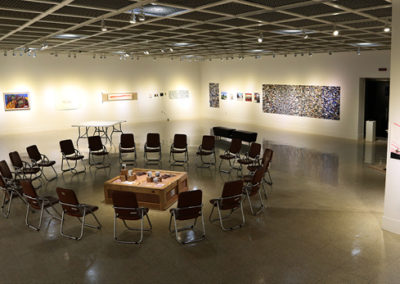 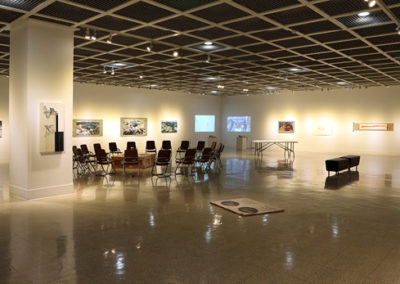 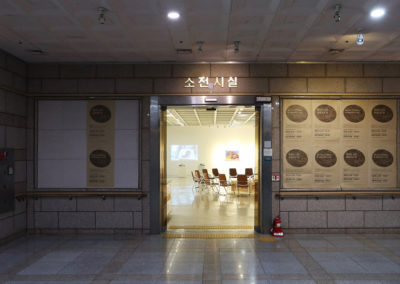